The BBC has addressed complaints about its coverage of Prince William and Prince Harry at Prince Philip’s funeral.

Viewers have hit out at the BBC’s commentary during the Duke of Edinburgh‘s funeral.

Coverage of the funeral aired on the broadcaster earlier this month (April).

Members of the royal family took part in the funeral procession, including the Duke of Cambridge and the Duke of Sussex who walked with their cousin Peter Phillips. 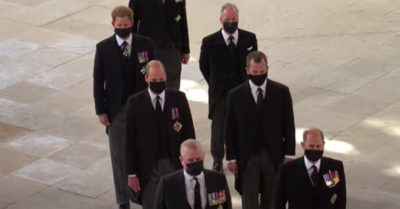 During the coverage, BBC commentator Nicholas Witchell shared his thoughts on William and Harry’s relationship.

It sparked complaints from viewers, who felt it was an inappropriate time.

In response, the BBC said in a statement: “We received complaints from people unhappy that Nicholas Witchell offered analysis about the relationship between the Duke of Sussex and the Duke of Cambridge, when reporting on the funeral of HRH The Prince Philip, Duke of Edinburgh.

“Nicholas Witchell, reported in detail on the funeral of HRH The Prince Philip, Duke of Edinburgh. He reflected its historic and national significance, remembering the life and achievements of the Duke. He also examined what this moment meant for The Royal Family.”

Prince Harry attended the funeral of his grandfather, while pregnant Meghan – under the advice of doctors – stayed at home in California. Will Prince Harry return to the UK? (Credit: Splashnews)

Will Prince Harry return to the UK?

It’s expected that he is supposed to return once again to the UK in July for the unveiling of a Princess Diana statue.

The statue will mark what would have been the late Princess’ 60th birthday.

However, Meghan is thought to be expecting to give birth just weeks before.

The timing has led some to believe Harry may use the birth as an “excuse” to stay abroad.

Royal expert Russell Myers told talkRadio that Harry is likely to still come. However, that could change.

Mr Myers said: “I’m told he’s still committed to coming. I’m sure he could jump on a private jet and make a flying visit.

“But will it be a convenient excuse that he doesn’t need to come over and face the family.”