Great British Menu judge Simon Rogan: Where is he from and how many Michelin stars does he have?

Great British Menu judge Simon Rogan: Where is he from and how many Michelin stars does he have?

Chef Simon Rogan appears as a guest judge on Great British Menu on Wednesday (April 21 2021), but where is he from and how many Michelin stars does he have?

Is the top chef married? And how old is he?

Here’s everything you need to know about Simon Rogan and his career. 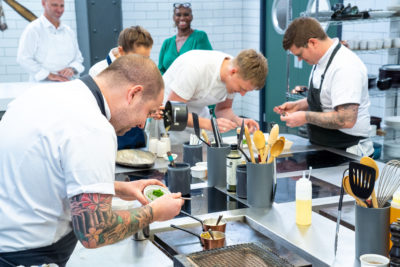 Who is Simon Rogan?

Simon’s love of food and cooking began at an early age, thanks to his dad who worked at a wholesale fruit and vegetable market.

He came home every evening with a box of the day’s best produce – food that Simon was at first suspicious of.

At 14, Simon took a weekend job in a Greek restaurant in his hometown of Southampton and later enrolled at catering college.

He told GQ of his time there: “I was surrounded by aspiring chefs who were far more experienced than me and were working in the great country-house hotels of the New Forest.

“I couldn’t stand for that! So that fired up my competitive spirit and I vowed to become the best chef I could.”

And that he did!

He started work as an apprentice at Rhinefield House Hotel in Hampshire, aged 17, under a chef who had worked at The Savoy.

In 1988, he took a position as a pastry chef at Geddes Restaurant in Southampton, under chef Jean-Christophe Novelli.

The pair remain good friends, and Jean-Christophe is godfather to Simon’s children.

His first head chef role was at Adlington Place in Croydon.

In April 2014, he starred in BBC’s Restaurant Wars and also guest judges on Great British Menu. 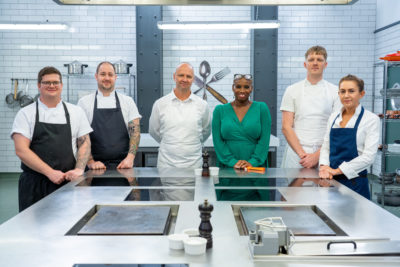 Where does he work now?

In 2002, Simon and his partner Penny Tapsell opened their own restaurant – L’Enclume in Cartmel, Cumbria.

Influenced by French chef Marc Veyrat, the menu focuses on both farmed and foraged food.

In both the 2014 and 2015 Good Food Guides, L’Enclume was named the best restaurant in Britain, edging out Heston Blumenthal’s The Fat Duck and Restaurant Gordon Ramsay.

In 2008, he opened Rogan and Co, an informal restaurant and bar only a few yards away from L’Enclume.

Six year later, he took over the menus at Fera, in London’s Claridge’s, but they parted ways in 2017 so Simon could focus on his own independent restaurants.

And, in early 2018, he reopened Roganic as a permanent site in Marylebone, winning a Michelin star until it closed again in 2020.

Next came Henrock in the Lake District, which is a more informal restaurant but follows Simon’s tradition of farming and foraging.

How many Michelin stars does Simon Rogan have?

In 2014, he took over the menus at Fera, in London’s Claridge’s, which earned him another Michelin star in the 2015 guide.

In 2018, his informal restaurant Rogan and Co won a Michelin star.

His Roganic in Marylebone won a Michelin star until it closed in 2020.

Simon currently holds a total of four Michelin stars across his restaurant portfolio, including at L’Enclume which has two stars, and Rogan & Co, which has one.

In January 2021, L’Enclume received a Michelin Green Star, recognising it as a leader in the field of sustainability. 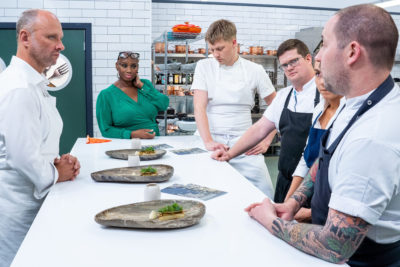 Is Simon married and does he have kids?

The husband and wife team work alongside each other running L’Enclume.

In a recent interview, Simon said he was happiest “at home with my family”.

He added: “Life is short and I’ve sacrificed family life for many years.”

Simon Rogan has three sons, the eldest two with his ex-wife.

Simon’s son Craig has followed in his footsteps and was named as executive head chef at the Dakota hotel in Leeds in 2019.

Where is Simon Rogan from?

Simon Rogan was born in Southampton, and educated at Southampton Technical College.

He later moved to Cumbria, where he currently lives and works.

How old is Simon Rogan?

He is currently 53 years old.