Lucy, The Human Chimp: What happened to her and where is Janis Carter now?

Lucy, The Human Chimp: What happened to her and where is Janis Carter now?

Possibly one of the most famous animals on the planet, chimpanzee Lucy is the focus of a new Channel 4 documentary this Monday (April 19 2021), but what happened to chimp Lucy and Janis Carter?

How did she become known across the world and did the experiment work?

Here’s everything you need to know about Lucy, The Human Chimp on C4. 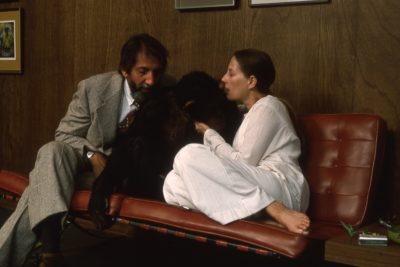 Who was Lucy, the human chimp?

Lucy was a chimpanzee who was raised as a human in the 1960s.

In 1964, Dr Maurice Temerlin and his wife Jane adopted a two-day-old chimpanzee as part of a radical experiment.

Lucy lived with the psychology professor as a member of his family, and was given every home human comfort and treated as if she was their daughter.

She even made her own meals, mixed her own cocktails, read magazines, had her own pet cat and learnt sign language.

Crucially, perhaps, she had no contact with other chimpanzees.

However, when Lucy reached sexual maturity, she bit someone and threatened others.

The Temerlins decided they had to let Lucy go as the experiment was deemed too dangerous to continue.

In 1977, they sent her to a sanctuary for orphaned and captive-born chimps on a remote island on the Gambia River in Africa.

What happened to chimp Lucy?

To help Lucy adapt to life in the wild, they hired Janis Carter to accompany her.

Janis was a grad student working in the primate studies group at the university.

The student was hired to spend three weeks with Lucy on the island as she learnt how to be a wild chimp.

However, the bond between them grew and Janis feared Lucy would not survive in the wild on her own.

Eventually, she chose to give up her life and live with Lucy in the jungle for six years – with almost no human contact.

She left behind her boyfriend and a career as a teacher.

After six years, Lucy was ready to say goodbye to Janis.

Sadly, Lucy died the following year in 1987, but Janis remained in the region. 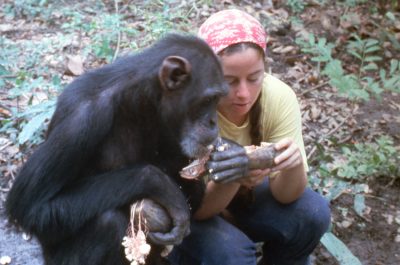 Why was Lucy so famous?

Lucy was one of the first experiments involving chimps.

She appeared in Life magazine, where she made the headlines for drinking straight gin, rearing a cat, sculpting models of human heads out of her own faeces, and using Playgirl and a vacuum cleaner for sexual gratification.

Lucy has been the subject of many studies, books and TV shows.

In early 2010, Lucy’s life-story was the subject of a one-hour Radiolab episode entitled Lucy.

Excerpts of this show were also included in the February episode of This American Life.

Humans and chimps share a surprising 98.8 per cent of their DNA.

Ever since researchers sequenced the chimp genome in 2005, they have known that humans share about 99% of our DNA with chimpanzees. 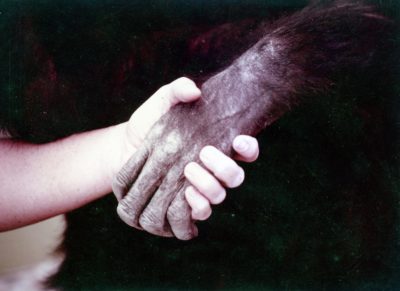 Janis lived in the wild for six years to take care of Lucy, but what happened to chimp Lucy? (Credit: Channel 4)

Where is Janis Carter now?

Janis is still alive and features in the C4 documentary.

Now 70, she is interviewed and gives a first-hand account to the documentary makers.

She says: “There was no chimpanzee/human. It was Janis and Lucy.”

Janis now keeps a house in the Gambian capital, Banjul, and has a handful of “close and loyal” human friends.

But she spends most of her time at her riverside chimp rehabilitation centre and conservation project, where she still sleeps in the old cage.

Facing the centre is the island that now is home to 140 wild chimps, descendants of her original group of 10 including Lucy.

As she gets older, she has started writing a memoir and has even made the first tentative steps to reconnect with her estranged family.

Lucy, the Human Chimp on C4

The one-off 95 minute show also uses reconstructions (with an actor playing Janis) based on first-hand accounts.