Prince Edward and wife Sophie have been spotted looking over the heartfelt messages and tributes to Prince Philip at Windsor Castle.

The Earl and Countess of Wessex said goodbye to the Duke of Edinburgh last week.

Paying their respects today (April 16), the couple visited St George’s Chapel to look at the thousands of flowers and tributes to Philip. 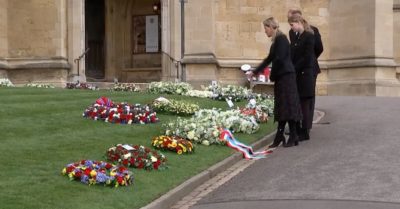 Edward, 57, and Sophie, 56, were also joined by their daughter Lady Louise Windsor, 17.

The family were seen reading the touching notes in honour of the Duke of Edinburgh.

At one point, Sophie read out a handwritten letter amongst the pile.

Dressed in black, the trio stayed for around 15 minutes before leaving.

The outing comes shortly after Prince Charles and Camilla looked at tributes at Marlborough House Gardens.

During the visit, the pair seemed visibly moved as they read through the heartfelt notes. 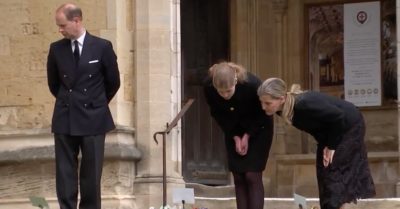 According to Hello! magazine, one card read: “Your memory will never fade. Rest in Peace.”

In addition, a second said: “We are so sorry for your profound loss Your Majesty’s ‘strength and stay’ will endure in our hearts always.”

The public were urged not to lay flowers to prevent crowds – but that didn’t stop royal fans.

Edward pays tribute to his father

The Earl of Wessex told ITV: “My parents have been such a fantastic support to each other during all those years and all those events and all those tours and events overseas.

“To have someone that you confide in and smile about things that you perhaps could not in public. To be able to share that is immensely important.” 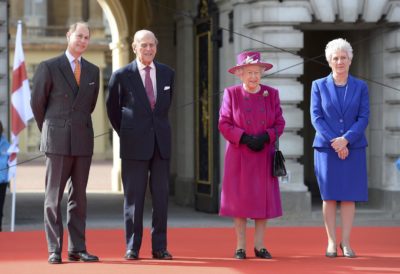 Following Philip’s death, the pair were spotted visiting the monarch at Windsor.

As the couple left and drove through crowds outside the castle, Sophie had tears in her eyes as she said the Queen “has been amazing”.

Sky News’ royal correspondent Rhiannon Mills shared: “The Earl and Countess of Wessex have just driven past the crowds outside Windsor Castle.

“Sophie had tears in her eyes and told me through the car window ‘the Queen has been amazing.’”