All That Glitters: Britain’s Next Jewellery Star: Who are judges Shaun and Solange?

All That Glitters: Britain’s Next Jewellery Star: Who are judges Shaun and Solange?

All That Glitters: Britain’s Next Jewellery Star begins on BBC Two this week (Tuesday April 13 2021), but who are the host and judges and what’s it about?

The brand new BBC show is like an X Factor for jewellery makers and will see one competitor eventually crowned winner.

Here’s everything you need to know about All That Glitters. 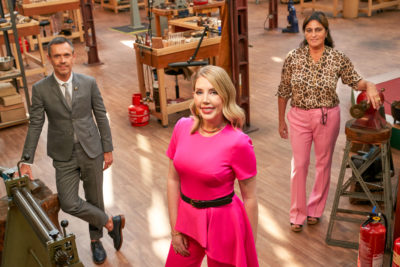 Read more: Has Katherine Ryan had surgery and is the comedian married?

All That Glitters: Britain’s Next Jewellery Star: what’s it about?

We’ve had baking, cooking, pottery, sewing and gardening talent shows, so why not jewellery?

Eight talented jewellers compete to prove they are Britain’s Next Jewellery Star – often with beautiful results.

In each episode, the competitors are faced with two very different challenges, with their work judged by two of the biggest names in the business.

Each week, one contestant must leave the competition.

Episode one sees the eight contestants given their first challenge – the Bestseller.

They must make three silver bangles, before they face the Bespoke challenge and a real client.

This week, Ben wants a pendant necklace for his mum to wear to Buckingham Palace when she collects her MBE.

But who will impress the judges and save themselves from being the first to be sent home?

Where is it filmed?

All That Glitters is filmed in a specially-built workshop in Birmingham.

The buzzy workshop is nestled in Birmingham’s historic Jewellery Quarter.

While appealing for contestants, the BBC revealed: “The materials they are working with are some of the most valuable objects on earth: gold, silver, diamonds and sapphires.

“And they will be doing so in the real world, as their workshop is nestled in the heart of Birmingham’s historic Jewellery Quarter, home to the highest concentration of jewellery businesses in Europe and some of the UK’s best diamond cutters, gold bullion dealers and gemmology labs.” 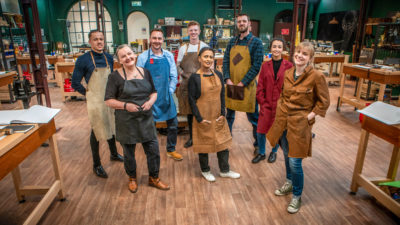 All That Glitters: Britain’s Next Jewellery Star pits eight contestants against each other (Credit: BBC Two)

Where can I watch it?

It will be available to watch on BBC iPlayer.

There will be six episodes in the series, with a new episode airing every week until the final on Tuesday May 11 2021.

All That Glitters host: Katherine Ryan

She recently appeared on Celebrity Bake Off, and is most famous for her Netflix comedy series The Duchess.

The stand-up comedian, writer, presenter and actor has appeared on numerous British panel shows, including as a regular team captain on 8 Out of 10 Cats and Never Mind the Buzzcocks.

In 2015, she replaced Steve Jones as the presenter of Hair on BBC Two, and remains one of the UK’s top comedians.

All That Glitters judges: Solange Azagury-Partridge

Neither Shaun Leane nor Solange Azagury-Partridge mince their words, but Solange is particularly brutal with her criticisms.

Solange is a British jewellery maker who owns the brand Solange.

She created her own engagement ring, and has had her work displayed in the V&A London and the Musée des Arts Décoratifs in Paris.

Solange, 59, owns her own shop, and has worked with some of the biggest designers in the world.

She’s even designed jewellery for blockbuster films, including 2009’s Snow White and the Huntsman.

Self-taught Solange says: “It’s such a mystery when you start out in this business.

“It’s so painstaking, every part of it, and you have to put so much thought and energy into it.

“If you don’t have a passion for it, you’re not going to last.” 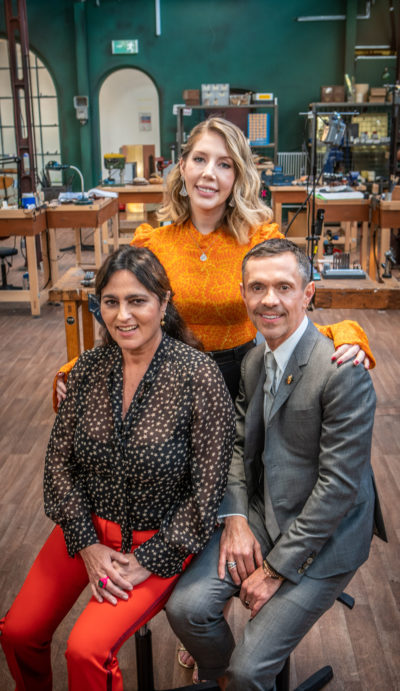 All That Glitters judges: Shaun Leane

He has his own brand Shaun Leane, and has won UK Jewellery Designer of the Year four times.

His work has been featured on the catwalk, praised by the editor of Vogue and even worn by the royal family!

When asked in the first episode what he is looking for in a contestant he replies “sexiness!”

Shaun and Solange have been good friends for many years.

All That Glitters: Britain’s Next Jewellery Star begins on Tuesday April 13 2021 at 8pm on BBC Two.

Will you be tuning in to watch All That Glitters on BBC Two? Leave us a comment on our Facebook page @EntertainmentDailyFix.