Game of Talents debuted last night (April 10) on ITV to a mixed reception.

The game show sees contestants pair up with celebrities to try to uncover the secret talents of the eight mystery performers in each episode.

ITV had Vernon Kay series would become a big hit with viewers.

However, sadly the show didn’t seem to go down well with those watching at home. Game Of Talents wasn’t a hit with some viewers (Credit: ITV)

Viewers rage over Game Of Talents

One viewer tweeted: “#GameOfTalents is possibly the worst television I’ve seen in some time!”

“On BBC or ITV it’s between #icanseeyourvoice or #GameOfTalents. Now that wall-to-wall coverage of Prince Philip doesn’t seem that bad at all,” said a second.

Don’t you wish BBC and ITV had dropped tonight’s programmes instead of last nights…? #GameOfTalents #icanseeyourvoice

Amanda Holden on BBC1 and Tess Daly on ITV1. It’s like choosing between a cough and a cold #GameOfTalents #ICanSeeYourVoice

#GameOfTalents is possibly the worst television I've seen in some time

A third said: “I don’t think a show’s left me with the feeling of such a violent shrug in some time, so well done I guess?”

“I watched the first 10 mins of the new programme #GameOfTalents. Load of rubbish in my opinion,” ranted a fourth who had clearly switched off.

While a fifth added: “Amanda Holden on BBC and Tess Daly on ITV. It’s like choosing between a cough and a cold #GameOfTalents #ICanSeeYourVoice!” 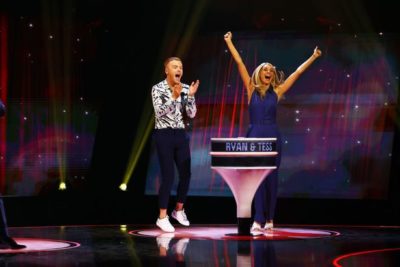 However, not every viewer was unhappy.

Some were just pleased to have Vernon Kay back on their TV screens.

One fan said: “This Game of Talents ain’t half bad! Good to have Vernon Kay back doing what he does best.”

“So nice to see Vernon Kay back on telly with a new fantastic game show!” another added.

While a third tweeted: “Loving seeing Vernon back as a game show host!”

Game of Talents continues Saturday April 17 at 7.30pm on ITV.