Line Of Duty star Adrian Dunbar has confirmed that Ted Hastings is not the fourth ‘H’.

Adrian, 62, has played the fan favourite Superintendant for five series.

Throughout its run, the BBC One crime drama has had viewers on the edge of their seats guessing who the four Hs are – those shady members of the police force who are involved in organised crime.

Fans will be overjoyed now Adrian has confirmed that Ted is not one of them. 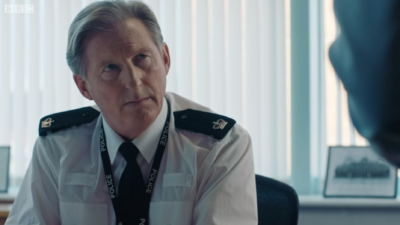 What did Adrian say about Ted Hastings in Line Of Duty?

Adrian revealed on the How To Fail podcast that creator Jed Mercurio told him that he was not the culprit.

Jed’s revelation comes after Ted was suspected of being H in series five.

Adrian said: “It was a relief for me, as I spent all this time playing this character and I always thought Ted had a sense of duty and a moral core.

“And to have found out I was this arch-villain… I would have been in real difficulty accepting that.

“Jed is aware of our audience and they know Ted has a sense of moral fortitude.

“I am glad he came out of it with flying colours.” 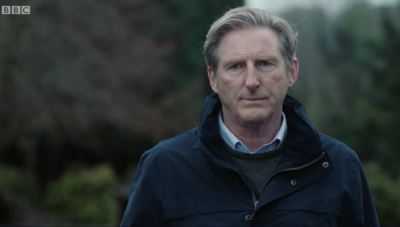 Ted was set-up! Mother Of God!

In the last series, Ted was set up as H by shady lawyer Gill Biggeloe.

During the six-part series, we learned more about Ted’s past in Belfast and his connections to undercover officer John Corbett’s mother, Anne-Marie McGillis.

Poor Ted was also caught up in a property blackmail scam, but DIs Steve Arnott and Kate Fleming came to the rescue to find the evidence and get him off the hook.

However, Ted still managed to skim £50k from the blackmail money to give to John’s widow, Steph. 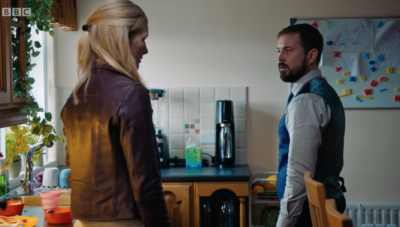 Was there an ‘H’ spelt out in Steph’s kitchen tiles? (Credit: BBC)

Was there an H clue in last week’s episode?

Viewers are still guessing the identity of the fourth H as series six’s half-way stage approaches.

And last week, in episode three, viewers were convinced they spotted a clue.

When Steve went to visit John Corbett’s widow, Steph, fans noticed a pattern on her tiled kitchen wall which was in the shape of the letter ‘H’.

Could Steph have something to do with the Organised Crime Group?