This week, Faith Dingle will return to the village. However her return doesn’t go down well with Cain after everything that’s happened. 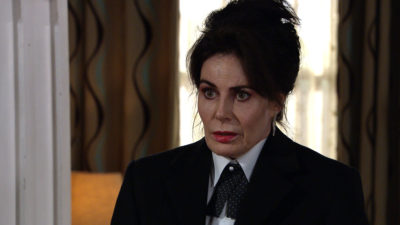 On the other hand, Faith’s daughter Chas admits she’s missed her mum. It’s not long before Cain and Chas are at loggerheads over whether Faith can stay.

They soon decide there’s only one thing for it – A Dingle court.

In next weeks scenes, the Dingle court goes ahead to see if Faith can stay in the village. Moira defends her vote for Faith to a simmering Cain, pointing out she was only trying to help him. 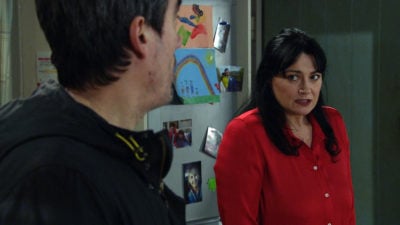 Will Faith problems with Cain and Moira? (Credit: ITV)

Anguished, she begs him not to let his anger keep him from his new granddaughter Frankie. But Cain tells Moira to pick a side.

Moira is worried by Cain’s ultimatum and tells Chas and Paddy that she’s beginning to regret her vote.

When Paddy questions if it’s really a good idea to let Faith stay in the village when she’s already causing misery, Chas is torn.

But what they don’t realise is that Faith has overheard their conversation. She’s left wondering if the battle is too big this time and starts to make a decision.

Later Zak calls Cain round to the Dingles and points out that his belief that Faith doesn’t love him has blighted his life. 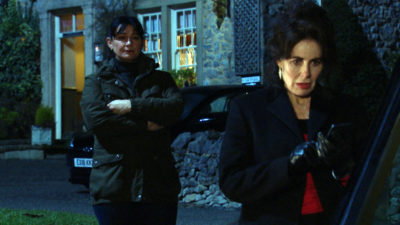 Moira catches Faith sneaking away from the village (Credit: ITV)

He suggests that if they can resolve things, Cain can leave that torment behind. But Cain is unreadable.

Meanwhile, Moira catches Faith leaving he village, unable to believe she was going to sneak away without saying goodbye to her family.

Can Moira convince her mother-in-law to stay, or will she desert the Dingles again?